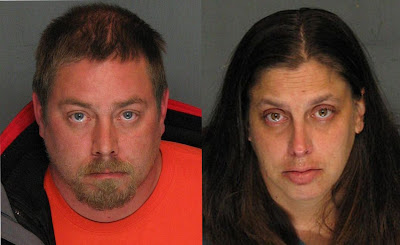 I am not posting this to make light of what happened. This is terrible.

A Girl Scout leader and her husband were arrested after an emaciated, terrified and nearly naked 17-year-old showed up at a gym with a chain locked to his ankle, saying he had just fled his captors, authorities said Tuesday.

Now, if this were a gay couple, the Reactionary Right would be yelling and screaming that this is all the work of those EVIL GAYS! But I would be willing to bet that this doesn't even "blip" on their radar.

The theologian in may says that this is a sign that we are a fallen people, ALL of us. This is a sign that even though we want to think that humanity is innately good, there are still people out there who will do evil. I would even give these people the benefit of a doubt that in their minds, what they were doing makes sense. But what they were doing has everything to do with being a fallen people and nothing to do with either a Heterosexual Agenda or the Homosexual Agenda.

But I am probably preaching to the choir on this one.

(h/t to Box Turtle Bulletin)
Posted by BentonQuest at 11:08 AM

But, Ben, this was a true marriage of a man and a woman, the only valid type of valid family unit, right?!

Just imagine the horror that this lad would have endured if he had been fostered to a gay couple! Why, I just shudder at the thought!

and they recruit children too.