The Feeling of Futility

I think that is what I am feeling:  Futility.  I don't think it is depression, as I had previously thought.  I look at the world and think, "Why bother."  Welcome Learned Helplessness!

It has settled into my head that no matter what I do, my situation is not going to change.  Up-date the resume.  Apply.  Pray. "Keep that chin up!" Think positive thoughts.  It all appears to be pure futility.

It is easy to look in from outside and tell me to keep going.  It is easy to say that I have to keep applying.  But I sit here and try to figure why I should even bother.  In the end, it will be all for naught.
Posted by BentonQuest at 12:14 PM

Posted by BentonQuest at 12:00 AM No comments:

Too Flawed to Function

Yes, I  am having a "Too Flawed to Function" kind of day.  I feel as if anything I touch will break.  (Thank you Dad for that one.)  I feel totally lost in my head.  I probably need to do something physical; get out of my head.

Whenever I think of something, I begin to contemplate the costs.  At $4/gallon for gas, travel is out.  Getting lost in the woods is difficult in the city.  I see Nik doing things around the house and feel guilty; I should have though of doing those things.  My general demeanor is that I am a waste of skin, space, food, air.

I know that most of this is crazy talk.  But it doesn't seem to help much.

The desire is not so much to die as it is to just remove myself from the time line.  I don't want to upset people.  I know people care about me.  But I see myself as holding people, especially Nik, back.  I feel very much like a taker without adding anything to the system.

I got another bill from the Hospital.  We are approaching $2500 for the kidney stone that is still there.

I hate feeling guilty for having health issues.  Maybe I am subconsciously attempting suicide by heart-attack.

Just how to stop causing pain to those who care about me.

I am turning off comments because I really do not want this to look like some pathetic plea for attention.  I just want to know that someone out there (even if it is only imaginary) heart this.
Posted by BentonQuest at 12:18 PM 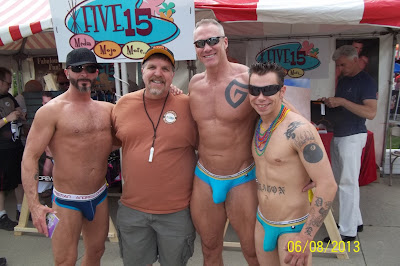 One of the things that I love about Pride is the attitude of acceptance that is found.  Me, a dumpy bear can stand next to some hot guys in underwear and have my picture taken.  (Or, to quote from "Hello Dolly," "Have our picture took.")  But it was not just the hot guys in underwear, it was the people who were in drag (both male and female) or the ones who just felt the freedom to cross-dress if they wanted to.  It was the people feeling safe enough and open enough to say, "I am rare and precious and deserve to be valued just like a gem or work of art."  It was just a lot of fun.

It was also people of faith being present with the Atheists.  It was being able to have a conversation that says something more than, "God hates you and you are damned."  It was a situation where (aspects of) the Church were able to affirm that we come in all kinds of shapes, sizes, and predilections, but God still loves us!  I wish we could get this more in our congregations; I think this is what Christ would have us do.

I have been careful not to post the above photo on Facebook for fear of some of my more "Churchy" friends being offended.  I would like to think that they would be offended by my obvious disregard for the sin of gluttony, but the offense would more likely be to the protruding body parts of my associates.  This is sad.  It shows that double standards still exist in society.  If I were standing among three bikini-clad ladies, some eyebrows may be raised, but not much more.  But because we are dealing with the male physique, we need to be offended.  Humm....

What I found negative was the lack of presence by some major main-line denominations.  For all the talk of the Episcopal Church and the Evangelical Lutheran Church in America being open and accepting, there was no presence.  Amid the Metropolitan Community Church presences, there was United Church of Christ, Methodists, CATHOLICS!!, Unitarians, and Non-Denominationals, TEC and ELCA were not there.  Considering they have both been making strides toward acceptance (especially TEC with its acceptance of trans people in the role of ordained clergy) it would seem that their presence at Pride would be a no brainer. That no church was present from either denomination was inexcusable.

Also what was missing was a faith presence from the traditionally African-American churches.  The number of (forgive me, I will use the term "Black" because it is easier to type!) black folks at Pride was wonderful!  But if any of these people were looking for someone who looked like them among the affirming community, they would have had a futile search.

While I found things to be excited about in the faith communities present, I also see that an opportunity to reach out was wasted.

All in all, it was a good thing.  I just wish more straight people could see all these "scary" gay people just having some fun.  I also wish they could let their defenses down long enough to dance in the sun, appreciate the artistry of a Drag King or Queen, cheer the freedom to allow one's actual self to shine through, and to be outrageous for no other reason than to be outrageous!  We really need to do that more often!
Posted by BentonQuest at 8:54 AM No comments:

Sorry it has been a while.

It has been almost two months since my dad died.

I really don't know what to think about the whole situation.  I know that I should give people a break at times like this, but I also know that people tend to let their true feelings slip when they don't have the energy to "play nice."

What I find really sad is that it would appear that my family, both close and more extended, are of the assumption that I never consider anyone else in my actions.  That anything that I do is for a selfish intent.  I was told that I put things on Facebook so I could get people to feel sorry for me.  I asked for prayers because I was uncaring.  It was  not considered that I was a clergy person asking for some assistance.  No, I was bad.

We were able to make it through the funeral, but things have not changed.  I have tried to contact my sister and she has never returned my calls. I just really want to tell her, "You know I will always love you, but let's just quit trying to pretend you like me.  I will quit trying to get you to like me and you can just avoid me."

I really do not want to go back "home" anymore.  I am tired of the bull.

Also, sorry for the downer.  I seem to write in my blog more when I am depressed.
Posted by BentonQuest at 2:30 PM No comments: