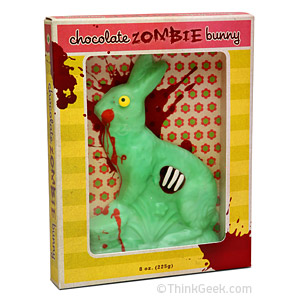 Ok, it is not Christmas related, but a Zombie bunny?  It don't get much better than that!
Posted by BentonQuest at 2:28 PM No comments:

I was in an antique store yesterday and saw an old train tunnel.  You know, those things that you would put over the track and the train runs through it.  As I looked at it, I began to wonder:  Why do we have things like this?  Not "why do we have model trains," but "why do we put silly little 6" long arches of styrofoam over the trains?"

And then, I was thinking about more advanced train lay-outs.  Most of them have at least one tunnel of some sort on them.  Why?

I think it goes back to something primal about things disappearing and then reappearing.  Possibly a fear that the object will disappear or something.will happen while in the tunnel.  Now, of course we know that the train will come out of the tunnel (barring any derailment) but we still like to make things go through them.

This may seem like silly speculation to some, but I think there is something more to it.  It might be playing with our fear of death.  It is thrilling to us on some level that the train goes into the tunnel and disappears and then somehow the train reappears.  The train comes back from the dead.

I also was thinking about the rituals of "Good Night" and "Good Morning."  Are they more than just social niceties?  When I say "good night" or "good morning" to the cat, I am indulging in an unnecessary social nicety.  Or am I trying to reassure myself or the other that we will make it through the "death" of sleep and arise the next morning?

I don't know.  Just a little peek into what happen in my brain.
Posted by BentonQuest at 4:39 PM No comments:

I have been thinking about this whole thing with Rush Limbaugh.  Mr. Limbaugh is notorious for saying all kinds of outlandish things, why should this one suddenly make the headlines?  He obviously hit a nerve on this one.  He has moved beyond just being rude to being totally offensive.  I think the word he used to describe Ms Fluke is right up there with calling someone of African-American the "N" word or calling a gay person the "F" word.  He has moved beyond some kind of social line.

And his lame apology.  Of course, when you preface the apology with a joke about calling yourself to cancel your advertising, how are we supposed to take this seriously."  I am not sure Rush knows what it means to be apologetic.

I hope this is a sign that the American society is starting to see that the right considers them a bunch of non-thinking followers who will nod slack-slack jawed to anything the Tea Party has to say.  There finally comes a point where things just get too absurd; and I think Rush crossed it.

Do I hope Rush gets fired?  I don't know...  I don't choose to listen to him, usually.  I do listen to him when I am on a long drive so I have something to keep me angry, I mean "awake," after lunch.  But other than that, I don't choose to listen to him.  I am upset that people take his words as gospel truth, but that seems to be ending.  I think he gets way too much money for what he does, and that he has way too much power.  I think people need to question what is coming out of his mouth.  But I don't think he should be fired.

I see someone who has built a huge wall of grandiosity around himself to protect anyone from seeing the scared boy hiding below.

I have said it on FB, and I will say it now:  Maybe Rush should take his earnings and invest in some therapy.
Posted by BentonQuest at 1:35 PM No comments: