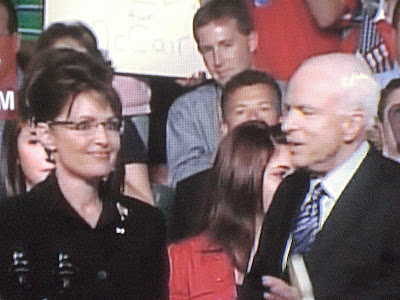 Not that I would want to wish death or health problems on anyone, but by a strange twist of fate, the Republicans may be responsible for the first woman president.

Heaven forbid Mr. Obama does not get elected, but if he doesn't , then that would mean that Ms Palin would become the first woman VP. And if Mr McCain were to forget where the White House is and wander into traffic on Pennsylvania Ave... Well, thanks to the Republicans, the United States may have their first woman persident.

Kind of boggles the mind, huh?

Then again, maybe that was the plan of the Master Mind "W" all along?

Unfortunately she is *very* "republican" - pro-life, anti-gay, pro-gun and under investigation for firing a state official because he would not fire her sister's ex-husband (a state trooper).