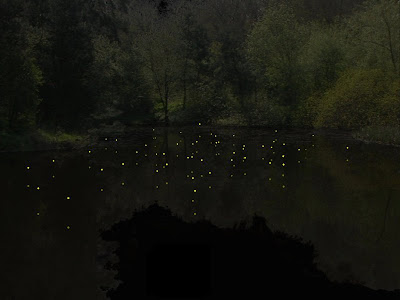 I was feeling a little nostalgic. I remember when I was younger going out into the country and finding a field of soybeans. Then, turning off all the car lights and looking over the field, you would see an undulating blanket of fireflies. They would be beautiful. And with the crickets in the background and the dew beginning to settle, the moments were just magic.

So I went out tonight to try to find a field. I found one that would do, but the fireflies just didn't seem to be around. There were some, but not the blankets. The crickets were present, the dew was settling, but the fireflies were just not there.

Kind of like the fireflies. They are still there, just not the way I remember them.

Well, maybe life is not like the fireflies, but it sounded good.
Posted by BentonQuest at 10:12 PM

Perhaps in other ways it is. In the darknesses of life may there be an undulating blanket of light that brings hope, beauty, and inspiration to you.