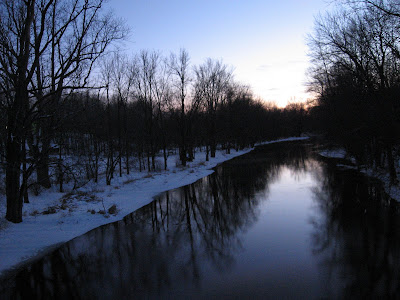 I realized that I really haven't said much about what has been happening here since Nick's hospital visit. I am pleased to say that he continues to do well and it appears that the blood pressure medication is working. This is a good thing.

I have been working and supplying at local churches. I enjoy the coffee job, I just wish the schedule was more predictable. But I shouldn't complain, at least I have a job. And I also enjoy the job so it is not a hassle to have to go in. It could pay more, true, but if I had a higher paying job, I would still be complaining about not making enough.

I have been making Christmas presents. You may remember that last year I didn't get my parents' Christmas present to them until July. So this year, I hoped to get things done early so I am not rushing at the end.

I know Ur-Spo may not want to hear it, but I have been enjoying the shift to Christmas around here. There is a radio station that has been playing Christmas music and there is a channel on cable that has Christmas music. Maybe my fixation on Christmas is an attempt to reclaim the "idealized" Christmas that none of us never have. (Well, maybe some of us have, but I didn't.) Unfortunately, this can set me up for a big drop in January when I realize that this Christmas probably is going to fall short also. But I will have to wait and see.

I actually saw some snow today. Either snow or chunks of sleet, or possibly a worker on the roof had some hellatious dandruff. They are not prediction snow until tomorrow, though. We have actually done well, we have not had snow yet this season and we usually have had some form of snow by now.

The psyche of the Good Dr., here, has been ok. I go through waves of acceptance, then then anger, then frustration, and then depression. I try to keep an even keel, but then there are times when I just get so frustrated at the state of being. I am working with a church trying to learn what it is like to be an Episcopalian, but it is taking time. Last week I was at the Diocesan Convention and that helped me to feel more a part. It was a kind of "completion." I was serving communion during the Eucharist and had the first priest I encountered during my transition come through my line. It really hammered home how my life has changed.

Otherwise, Nick and I are doing ok. I am deflecting phone calls from creditors, I feel bad not answering, but I also hate having to constantly say, "I don't have the money." It is rather humiliating.
Posted by BentonQuest at 8:35 AM

Are you making stained glass gifts? We were at a local craft fair this past Saturday and I saw a vendor selling his handmade stained glass items and I thought immediately of you.

We are just finally getting frosts here and most of the trees still have their leaves. Some are still greenish! Very unusual for us for this late. No snow or sign of it yet.

So glad to hear Nick is doing OK. Good to hear that you are OK as well.

i am just back from a week away - and caught you in the christmas spirit!
hohoho
i wish i could send you some jolly christmas music!
give kisses to Nick.