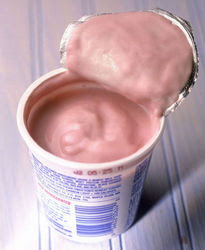 That thought nearly brought tears to my eyes today.

Now this post is not supposed to be a cheap attempt at pity. If that were the case, I would tell you right away. No, this post is more a reflection of the subtle ways in which we all get damaged throughout our lives.

Anyone who has read this for a while will know that we are not doing too well when it comes to the bottom line. So we are really trying to be frugal when it comes to just about everything. So when I opened the refrigerator and saw the yogurt in there, I was a bit surprised.

I am the one who usually eats yogurt. (I like to mix it with a bunch of uncooked oat meal.) So to see the yogurt in the 'frig just struck me. Even though money is tight, Nick though of doing something kind for me. Even though yogurt is a bit of a luxury, Nick bought some.

In my life, I have come to expect people to be out to get me. You know, the whole kid thing: as a kid I was horribly tormented so I began to approach the world from the perspective that people are going to continue to treat me horribly. I know that is a really paranoid way to view the world, but those things we learn as children tend to stick.

So it just struck me that someone has NOT gone out of his way to treat me horribly but kindly.

Bullying is such a part of our world. People say, "Kids will be kids." But how do kids learn to treat their peers badly? How do they learn to tell tell kids who are different that they are queer or faggot? There were billboards around Lansing with a picture of a little girt and next to her picture it said, "You yell at a driver and she learns a lesson," or, "You hit your spouse and she learns a lesson." Unfortunately, this is how children learn.

Our neighbor's girlfriend had a baby. Why do I think this baby will one day call someone a fornicating phallus head? Actually, I would be willing to place a ton of money on that occurring.

Thanks Nick for the yogurt, that was very kind.
Posted by BentonQuest at 12:13 PM

Agreed: we all get damaged.
But consider how a simple thing like yogurt could heal each of us and our world. One could hope that it would one day even heal that baby.

lemuel is right.
And awwwwwwww...... he got you yogurt!