Gearing up for the "Big Move" 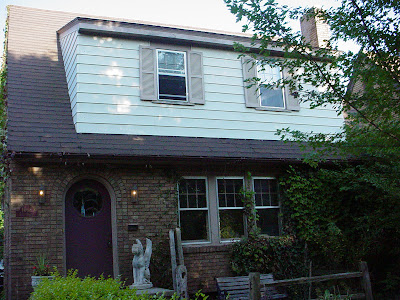 It seems like this move has been going on forever, and ye gentle readers are probably getting sick of hearing about it. I don't know if it would have been better to just move the whole thing in one swell foop or if it was better to do it in little steps as we have been doing it. Well, either way, we rent the truck tomorrow and move the couch, bed, dressers, coffee table, and other assorted crap. 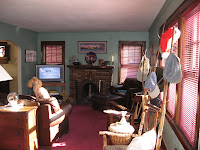 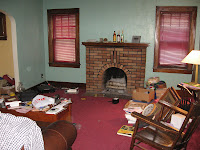 I will miss living in this house. I fell in love with this house when I first stepped foot in it. Now it has been stripped and it is becoming increasingly empty. There are big gaping holes of nothingness where tables and furniture used to be. The computer is going today and the (very heavy!) television went Tuesday. Here we have "before" and "after" shots.

Sometimes I feel so childish. Here I am, a 42-year-old man, moved to tears because I have to move. If this were a happy move with something to look forward to, then maybe I would be more joyous. As for now, it just seems to reinforce the feelings of anger and frustration.

And it also seems that every interaction I have with the church becomes one of pain. Going to meetings reminds me how I am an outsider and supply preaching reminds me of how I am sitting fallow.

There are clergy who are getting headlines for their struggles. But there are also us, the ones who are quietly fighting in the trenches. Maybe I should have become a poster child. Maybe I shouldn't have left quietly. I guess I can second guess myself until forever, it is not going to change what already is.

Of course, in the midst of all of this, we cannot be without drama. A watch that I received as an ordination gift needed batteries. Doesn't sound like much, huh? Until you realize that it costs $50 to replace the batteries. Then the watch still doesn't work. So off to get that looked at and possibly another $70 in cleaning. I would hate to get rid of it, it is my "Fire and Brimstone" watch. The background has dancing flames on it. My friend told me to look at it and remember to "Give 'em Hell!" I don't thing Fossil makes them anymore.

Then I take my truck to see why the brakes are making noise. (Actually, I knew why they were making noise, I was just hoping I could get the brakes fixed for a couple hundred.) Well make that over $500! It seems like there is no way of getting a break.
Posted by BentonQuest at 8:02 AM

I think your feelings are all very understandable and reasonable, given all the circumstances. Just from the pictures that you have shared, I would agree that you had a charming home. I would admit that I am more like you than I am like Nick. I have a hard time letting go of the things that are tied to memories of people and good times. Best wishes to you as you complete your move. May it truly be, not what you see now, but a move to a brighter, happier hope-filled and fulfilled future!

life is full of paradox and irony and outrage and hurt, no?
in your move, take some time off to breathe and stretch and hug.

We still have a 10x10 storage unit packed to the gills with stuff that came out of my place and my sister's place that either she, her husband, or I am unwilling to part with - yet have no way to use in the near future. And we've paid $660 for the privilege of keeping it this last year. If it all went up in smoke, it wouldn't be worth $66, let alone $660. But inertia is its own form of addiction, so it stays.

I understand the sense of loss, brother - because I have given up a great deal, as well. Moving back to Toledo felt like failure (and sometimes still feels like it), because it's "moving home with the family." Never mind that I'm here to HELP the family - I'm still 50, essentially homeless and broke. And it sucks.

In the original book Dune, I think it was Gurney Halleck who said, "A place is just a place; it's the people who make a home." You and Nick could be in a one bedroom apartment, or a trailer in a field somewhere, and it would be home to you.

And wherever you are, your friends will be welcome, and new memories will be made. And God will be there - something about "wherever two or more of you gather" or some such...

Right now, my friend, all you can do is just hang on. The rough and raw edges will wear down, all the spiritual and emotional hangnails will stop tearing and hurting eventually. But for now, the whole "gotta make the donuts" thing is what we've gotta do. Just know that you're not alone.

If you weren't moved to tears because of the indignity and the injustice of it all, you'd have to explode, I think. Remember Psalm 137? Even the concept of infants skulls being smashed on rocks manages to serve God's will....

As for the woulda-coulda-shoulda syndrome, yeah - you could have become one of the rebels who threw themselves on the soldiers' bayonets. But I'd point out to you that not every congregation is Brad Schmeling's church, and your path might not have played out as pretty as his did.

The fact is, you don't need a collar and a pulpit to preach, teach or counsel. Your writing here does so. Remember that - because you've told me the same damn thing a time or two yourself. Sauce for the goose AND the gander, baby...

Hang in, and know there's a big ol' bear in northwest Ohio thinking of you and praying for you...
~Steve