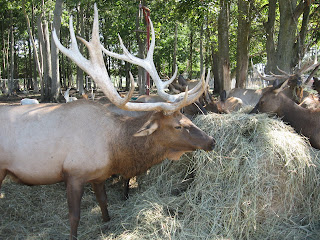 This is an elk that is part of a herd kept by the BPOE (Benevolent and Protective order of Elks) in Gaylord, MI. We stopped to see them on the way to the bridge. I used to live in the area so it was kind of old home week. It was fun to take Nick to see the things of my past. 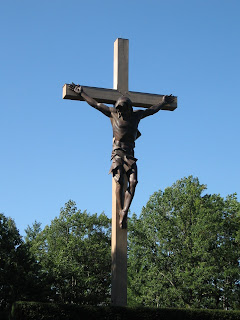 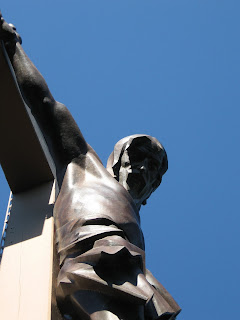 These two are pictures of the Cross in the Woods. This was kind of cool in a schmaltzy sort of way. The cross is huge! 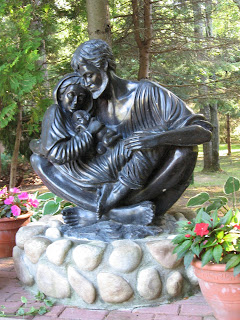 This is the Holy Family statue. I needed to take the picture because I am a collector of Nativities. I thought this one was very nice. 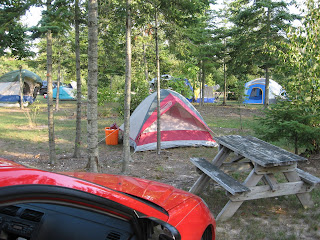 Here we had our home away from home. Of course, to keep our "Family Cred" we had a queen sized air mattress with 600 thread count sheets. One can only "rough it" so much. 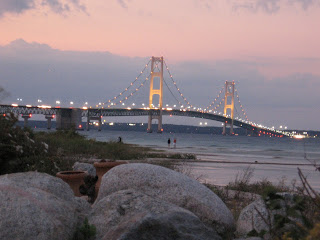 And as the sun sets in the western sky, we look upon the edifice we were about to take on tomorrow. 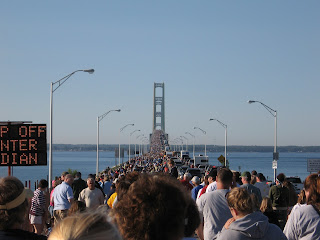 We got up at 5 am and got moving, showered (which was about 4-5 city blocks away), and packed up camp. We then drove into town, parked and walked to the place where we could get a bus across the bridge. We stood in line for about an hour and then spent another hour crossing the bridge. Everyone starts on the St. Ignace side of the bridge and walks south to the Mackinaw City side. Both ways of spelling the name (Mackinac and Mackinaw) are pronounced the same way, "Mack-in-gnaw," and don't believe anyone who tells you different! We walked on the two northbound lanes while traffic was diverted to the southbound lanes. 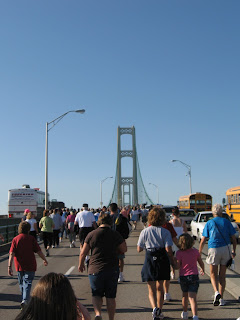 You really get some neat views of the bridge, which is the longest suspension bridge in the western hemisphere. (Just short of 5 miles.) While driving, you cannot stop and take pictures, this is the only time when pictures like this can be taken. 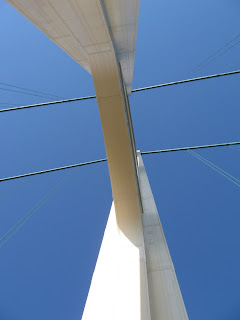 I have to admit, when we started walking, I thought this would be a perfect time for a terrorist attack. Some well placed bombs and thousands could be killed. There were military folks positioned along the bridge and the coast guard was in the water. Also in the water was a group of swimmers who swam the straits, a very impressive feat! 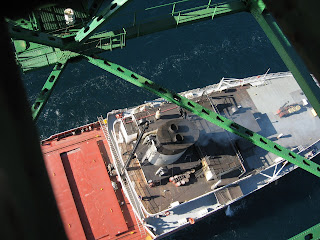 While we were walking, a freighter passed under the bridge. This is the smoke stack at the rear of the ship. The deck of the bridge is 199 feet above the water level. It took us about an hour and a half to walk the distance. When you get to the other side, they give you a numbered certificate which gives you an idea of how many people crossed before you. Our numbers were around 15,600. They were expecting over 50,000 people to cross. And although the foot traffic was supposed to stop at 11 am, there were still people crossing at 2:30 pm. Nick and I went to the Mystery Spot in St. Ignace and had to cross the bridge. There were still people crossing!

The Mystery Spot is supposed to be this incredible place. It was cute but actually kind of hokey. Not worth the seven bucks per person to see it.

I have to publicly thank Nick for walking with me. He messed up his knee on Sunday and was in pain the whole way. He is such a sweety!

Edit Note: This article said there were over 57,000 people who walked the bridge and the one hour wait doesn't seem so bad now!

Edit Note: Nick's take on the trip can be found here.

Posted by BentonQuest at 8:34 PM

These are some great pictures. Sounds like you had a wonderful time.

my favorite was the freighter going underneath; my father would have been so excited for that to occur.