I was really having a bad morning. I was talking with
the senior pastor about how to go about announcing my resignation. I was of the assumption that he didn't want too much said about being gay so the letter I wrote was somewhat (well, more than somewhat) vague on why I was leaving.

I was hoping to be able to move into a call in the Episcopal church when I leave but that doesn't look like it is going to happen. So when I leave, I will be leaving without any employment. And people will wonder why I am leaving if I do not have a position.

So we talked about being totally honest or not or what. I was getting totally distressed and started thinking that a good car crash could fix things nicely. I was quite upset and left church and called .Nick and went driving around town.

Just as I was about to toss the whole idea of being a pastor and just finding a job; when I was just about to say that the whole religion thing is a bunch of trash and maybe the whole God thing is trash too; just when I wanted to run off and hide, I turn a corner and see this: 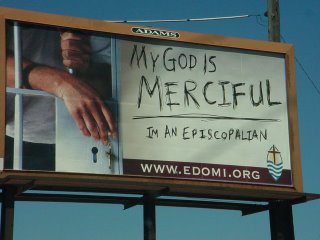 I will tell you, I almost drove off the road. It may be coincidence but I think God may be telling me something.

UPDATE:  I was later speaking with the Episcopal Bishop about this incident.  And he told me that the billboard was almost NOT put up.  People thought it was a waste of money.  It was only up for about a week.
Posted by BentonQuest at 7:09 PM

Until you have your life figured out, you have no right to guide others

Anonymous, you must not be familiar with Henri Nouwen nor the concept of the wounded healer. We will never have our lives figured out and if we were to wait until we do, no help will ever be given. A sign of a good therapist is that he or she is in therapy. It is from our wounds that we are able to heal.

hello, doc so i was just wondering how you can justify homosexuality in the Bible. due to the fact that you are a protestant and all your beliefs come from the Bible alone, i would like a Biblical explanation of homosexuality. Also i have recently spoken with a Lutheran who says Pastors are not allowed to express homosexuality and that the stand of the lutheran church is No gay pastors.
One thing that scares me about your whole situation described above is your willingness to throw God out on a whim when you are merely going through one tough time. i would hope that all the preists who guide me, although they are not homosexuals, would not let hard times effect their faith.