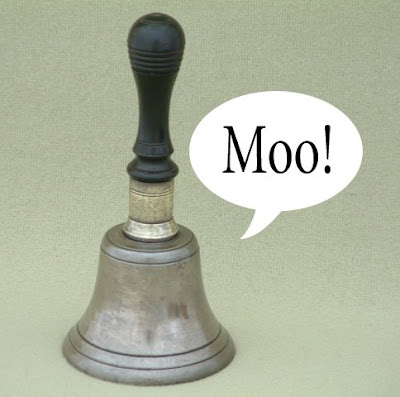 I find the whole concept of "Sacred Cows" interesting. At the church where I am serving, we have a little bell that is a sacred cow. This is a small bell that has a cross on the top of it.

It was used as the way of telling people to stop chatting in the narthex and come into the sanctuary. The first time it happened, I had this vision of herding cattle.

This is the only church I have ever been associated with that needed to be told that it is time to come into the sanctuary. Last Sunday, I started the service with only me and three other people there. My assisting minister was not even at the church yet.

I took the bell away because I figured that if worship were an important thing to people, then adults could be there on time. One lady just about popped an aneurysm when the bell was gone!

OMG!! I may leave and never come back and they would not know where the bell was!! (Yes, that was her worry. She told me so!)

So when I started the service on time (mind you!) with no one in the sanctuary, the comment was that if we had the bell, people would have been there.

I held firm and said that they were all adults and should know how to schedule their time. (Not quite that abrupt, but that general thought,)

Then the "Bell Woman" agreed that we should be able to make it in on time, but maybe if we had the "bell sitting there where we could see it, it would remind us to go in." (!) She was still worried what was going to happen to that DAMN BELL!

The lady who complained that we needed the bell had to tell me that ringing bells is traditional in churches. (Really?) I told her that if they wanted to ring the bell outside I am all for that! GREAT!! Let's ring it! (I don't think she was amused.)

They do have a bell outside and I was not kidding when I said we should ring the outside bell. Let the neighborhood know we are here! But the little indoor bell, no way.

I did concede that we could set the bell out, but not ring it. So the Bell Woman came into my office, got the bell, and then proceeded to tell us how "beautiful" this bell was. "So much better than the cross we have out there." (There is a cross on the top of the bell.)

So tell me: What do you think, am I being unreasonable?
Posted by BentonQuest at 10:02 AM