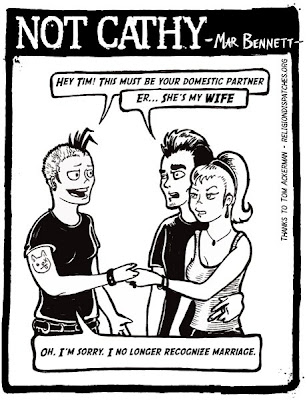 I read this over at Pam's House Blend.

What if, instead of referring to someone's "husband" or "wife," we referred to their "boyfriend," "girlfriend," "companion," or "partner?" And when we get corrected, we just say, "Oh, I'm sorry but my beliefs do not recognize your marriage"?

Can we make people stop for just a moment and contemplate another possibility, they may not be gay, but they may be next. When we place rights up for public vote, what is to stop the trend. I generally don't like using "slippery slope" arguments, but I think this one is valid.

It is kind of like the "White Privilege" or "Male Privilege" in that when you are the privileged group, it is hard to think of what it may feel like to be part of the other group. I got an understanding of White Privilege the first time I saw a black jock-strap. It never dawned on me that yes, people of color wear these things too! Maybe they don't want the straps to show through. And I really began to understand "Hetero Privilege" when I started to go out in public with Nick. It was interesting to go from being a White, Male, Protestant, Straight to GAY! This one title effectively wiped out the others.

I think it is worth a try. Not a big loud protest, but just a little word. But this one little word can begin a conversation and maybe make some people think. Maybe the next time they have to vote on our rights, they may think of their own rights! I don't care if we get our rights because others are afraid of losing theirs. I would like to think that people are innately good and would want to preserve the rights of all, but we can't count on that, so let's tap into peoples selfish motives!
Posted by BentonQuest at 7:37 AM

I have decided to stop attending church weddings. (Didn't like them anyway.)

I am sure that as e participate in this experiment we willget some very interestnig reactions.