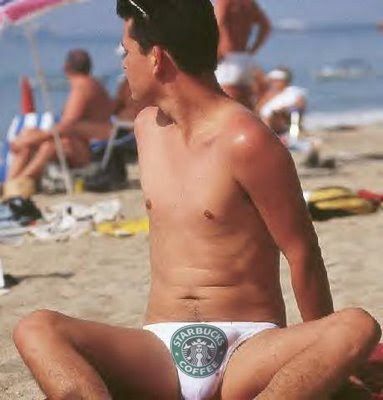 Things have been interesting inside the box lately. Seems the store is undergoing some remodels. As part of the remodel, the deli/Starbucks area is going to be changed. Also, as part of the remodel, the store is not going to renew its Starbucks license. So as of Aug. 19th, I will no longer be a Starbucks employee. (Darn! I really like my SBK's Speedos pic.)

What is worse, the new coffee shop in the store will not open until October. So there will be about two months where we will be doing "other things." These other things consist of working in the deli or in the butcher shop. I know me, and if I am working in either of these places, there will be blood. No, not mine, not even from the poor cow that gave its life for that steak; no, from the customers who only want "just a taste" of the cheese, or "that lobster over there."

Also, and I am sorry to say this, but the folks in the deli are not the brightest bulbs in the pack. (Nick will back me up on this one!)

We have heard this information, not from our supervisors, but from one of the workers from the other end of the store (which happens to be nearly a football field in length). We finally nailed the bosses feet to the floor and he grudgingly admitted that the rumor is true. Now, why didn't we hear it first? AAaaaarrrrrggggg....

We have plans for the Iced Coffee Idiot! He came back again and flaunted the fact that he knew our managers would back down. He said, when challenged about getting more than one free iced coffee, "Do I have to call the manager over here, AGAIN?" Now it has become personal for all of us in the box. We will do nothing illegal or dangerous, but we do have some of the worst iced coffee ever made just waiting for him!

So, I am again looking for another job. Some of us were not designed to work in sales! Especially sales of salads and t-bones.

Oh, I also decided that if I get a job in someplace other than the store, I would write the former neighbor little note telling him it is ok for him to come back into the store now. (yes, I know, I am totally passive-aggressive
Posted by BentonQuest at 7:57 AM

I wondered if you would be victim to the Starbucks' cutbacks.

I don't blame you sweetheart. Go for something new. I'll keep you in prayers.