Aaahhhh! This is too cool!! 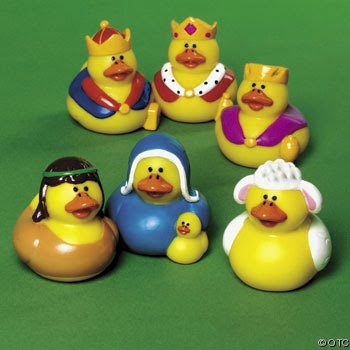 Some of you may know, but most of you probably don't: Both Nick and I collect Nativity Scenes. We have ones for Mexico. We have a Cowboy Nativity. And there is even the Beartivity. Then I saw this in the catalog for Oriental Trading. Yes, a rubber duckie nativity. Can you believe it? And Yes, I do want it!

I guess we now are full fledged "Family" members. We bought something from Ikea. I was moving my rather rotund rear on the futon when the frame broke. Now, sitting on the futon on the floor was just not working. So we went to the Ikea store and found a frame that is nice and was not expensive at all. It was cheaper than those ugly utilitarian black metal things that they make for $10 and sell for $140. So now we can sit in Swedish luxury. 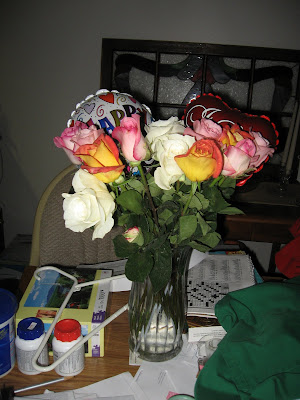 Nick bought me a dozen roses for my birthday. I had never received a dozen roses so I was totally shocked. They are beautiful! [gooy]Beautiful roses from my beautiful man![/gooy] ;-)

Nick also bought three pieces of male athletic lingerie (that some of you know I have a thing for) in yellow, orange, and blue. I would post pictures but I would have to refer you to the reason we needed a new futon frame! Sorry, those pics are not making it out onto the internet.

You know that you can only take off one of those presents at a time! ;)

Someone collects rubber ducks - I thank you for providing me his Christmas present idea!

Belated, way-past-belated happy birthday. I love the roses - and especially that Nick'd think to get 'em. Some men are romantically dis-inclined, even if they ARE gay...

I have an entire wall of unfinished pine shelving from Ikea - it's great stuff. Not much room for it where we are now - which is why God made storage units....

Happy Blessed Glorious Birthday!!!. You know, you could post pictures of the gifts and not the wearer. But you can send me a picture.