Jesus Was A Socialist 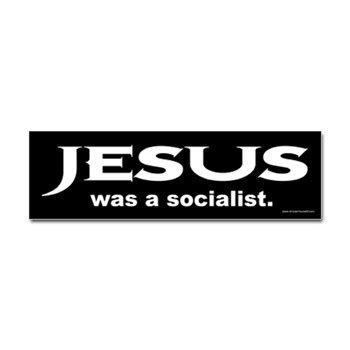 Ok, I am going to probably be more than a bit politically incorrect here. So before I go any farther, I would like to apologize. If I offend anyone, deal with it.

I heard an interview on NPR today. In it, a person whom I can only think of as a redneck was complaining about Obama wanting to "spreading the wealth." He was so upset about Obama being a socialist and not wanting to have anything to do with socialists.

Now, what wouldn't surprise me is if this redneck also claimed to be a Christian. T claim to be a Christian and also claim to want to have nothing to do with socialists is sheer stupidity. Excuse me but, uh, JESUS WAS A SOCIALIST! JESUS WANTED TO SPREAD AROUND THE WEALTH!!!

So, how can you be for Jesus and against socialism?
Posted by BentonQuest at 6:01 PM

One only needs to read the first part of Acts to read that early Christians sold everything they had, put it in a common pot, and distributed it to any who had need.

nonsense - i have it from people who KNOW Jesus was for guns and capitalism. and no commies.