Well, another weekend has come and gone. All too fast!

Nick and I traveled around south eastern Michigan this weekend. We had to go to the church for Nick and then we went out exploring a bit. We decided to go to Canterbury Village since we had the pamphlet and had never been there. Besides, there was a Christmas store there and anyone who reads this should know that I am a Christmas fanatic.

The store was nice. I liked it better than Bronner's. The building was cool with some of the most incredible woodwork and stained glass. We had some fun while there because there was almost no one in the store. 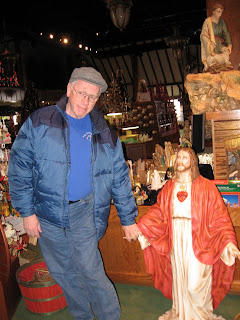 And we also found something at this store that we would never find at Bronner's... 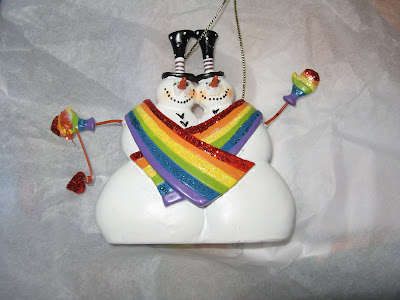 Today, we went to Nick's church in the morning and we were supposed to go to an 85th birthday party for his mom this afternoon. But it ended up that his mom spent her birthday in the hospital so we drove to the Detroit area to visit her.

AND IT IS COLD! Right now, it is 0 degrees out. AND WINDY!! You got to love winter in Michigan!
Posted by BentonQuest at 7:34 PM

i wasn't aware of the Lutheran connection to Bronner's but it makes sense; all the Germans.
i did once find an ornament of two red cardinals in the same nest. anybody knows the red ones are male, so what two males were doing 'nesting together".... well be bought it of course.