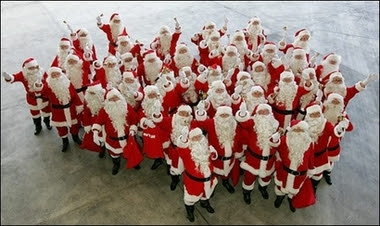 Nick sent this to me. Just when you think the world has gotten as weird as it can get, something like this come up.

SYDNEY (AFP) - Santas in Australia's largest city have been told not to use Father Christmas's traditional "ho ho ho" greeting because it may be offensive to women, it was reported Thursday.

Sydney's Santa Clauses have instead been instructed to say "ha ha ha" instead, the Daily Telegraph reported.

Posted by BentonQuest at 4:02 PM

i have been using hohoho and i don't intend to stop.
just because a word evolves into many meanings should not stop us from using it in context of the original definitions.
hohoho