Martin Luther Would Still Be Trying To Post The 95 Theses 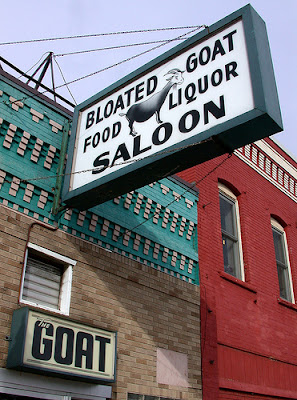 This post is not about The Bloated Goat but Nick and I had lunch there just becuase it was the wildest name for a bar that I have ever encountered. And it was pretty much what a dive bar should be. We went there, had lunch, left, and smelled of smoke the rest of the day.

What I really wanted to talk about is the ELCA decision of Saturday. The decision was that bishops wouldn't go after pastors in comitted same-sex relationships. It didn't toss the stupid rule that causes the problem, it is just telling bishops to ignore it.

Now some people are calling it a great step forward, and I guess we need to celebrate accomplishments. But I really have some problems with it. It still is creating a kind of "don't ask, don't tell." Pastors can be more open, but there is still a feeling that this is something that has to be hidden and something to be ashamed of.

This is all so anti-Lutheran. Luther was a man of action. He saw a problem and did something about it. If he were around today, the 95 theses would never have gotten posted to the Navy Pier doors. We would be sending it to the various and assorted committees makeing sure everything was ok. Maybe the Pope would be offended. The Jesuits may get angry and split off from the church. Maybe Nuns would want to marry their goats and priests their alterboys. We better not do anything let Luther do anything.

Yes, Luther posted the theses. And yes! The church split! IT NEEDED TO! Maybe the ELCA needs to leave the ones who want to revert to a law driven spirituality wallow in their laws and continue to move the rest of the church forward.

I am saddened by the actions of the ELCA. I feel the people caved in to fear. They were afraid action would split the church. I am afraid lack of action will cause a split.
Posted by BentonQuest at 8:10 PM

That name looks so familiar (racks brain for a moment). Ah, yes, the peerless UrSpo has a Bloated Goat tee shirt that he sometimes wears on vacation.

I'm beginning to realize that Michigan is a culture unto itself.

My cynicism leads me to say "follow the money". Sadly I see that not only in the secular sphere, but in the Church. We cannot take a stand because we do not want to offend and lose their money.

I am not Lutheran by official membership, but I admit to holding to a theology and worship style that is highly influenced by the ideas of Martin Luther. My own take is that Luther would roll over in his grave if he saw contemporary Lutheranism (much as most reformers would if they saw the present incarnation of their teachings).