Wake Up Call For Christians?

This comment was made by National youth leader Greg Stier of Dare 2 Share Ministries who believes one of the worst enemies of Christians are Christians.

Criticism from people outside of Christianity toward the Church doesn't surprise many. But when negative viewpoints are being expressed by believers, it raises a red flag for churches across the country.

In the latest research report by Sam S. Rainer III, who heads Rainer Research, only 39 percent of people who dropped out of the church perceived their church as "caring." Meanwhile, 51 percent of them called their church "judgmental."

The survey was conducted on 18- to 22-year-olds and is featured in Rainer's upcoming book, Essential Church?.

"The churches that do not demonstrate these biblical qualities and rather become insincere and judgmental lose this generation," Rainer, a young Baptist pastor, commented. "They return to the culture that claims churches are not living up to their calling. Link

What also worries me is when certain behavior is attributed to Christians but no one stands up and says anything. 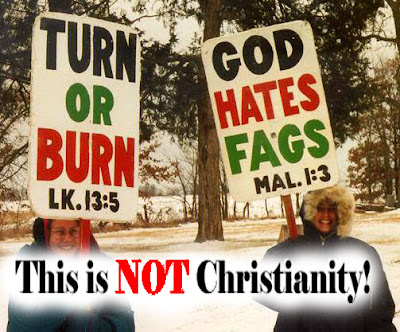 Please! Post this image (or if you are good at graphics, design you own) on your blog! LET PEOPLE KNOW! We need to let the world know that we people of faith do not condone the actions of these people and others like them.

Please help!
Posted by BentonQuest at 10:19 AM

Just this past Friday, I had a lengthy conversation with a co-worker. It was prompted by an article he had read recently written by a bishop emeritus of the ELCA discussing how the term "evangelical" has been kidnapped and twisted by extremist groups and has now become a negatively-charged word for many people.

The sad truth about the picture you post is that the scriptures cited have nothing to do with homosexuality in particular but *everything* to do with *everyone* - INCLUDING all those who preach hatred toward anyone for whom Christ died.

indeed! Christianity has a bad reputation that nowadays it conjures up not charity and love but nasty judgmental images of people wanting to convert you or wipe you out.