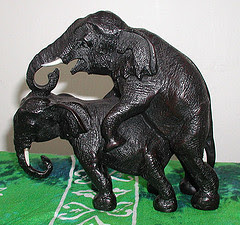 Ok, I just about totally lost it yesterday.

I was walking upstairs when I heard THE NEIGHBOR pounding, again. Now granted, I probably was not walking as lightly as possible (I had just gotten back from work) but I was not purposely stomping to anger the asshole man.

Well, that pounding did it. I was tired from work and I was tired of trying to not disturb the folks downstairs. But since we can NEVER be quiet enough for them, it was time to again bring the management into the situation.

I told the management that either the harassment stops or we WILL be released from our lease. Having to constantly be afraid we are making too much noise is not conducive of relaxing. I also said that from our point of view, it appears the management is doing nothing to address the situation, just telling us something will be done and then ignoring the situation.

Well, I had had it. I told them that was it. Something was going to change.

I later got a call from the property manager. Kind of cryptic. She said, "Can you tip-toe until Monday afternoon? I think I have something that will make us all happy. I am not at liberty to say right now, but I will have more information on Monday."

So it will be interesting to see what is going to happen. More information as it becomes available.
Posted by BentonQuest at 8:31 AM

We will all be very quiet until Monday. :)

I hope the solution is a win for your guys!