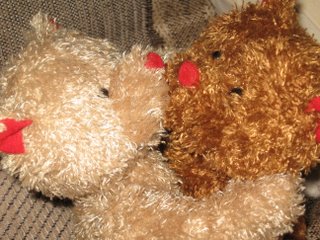 A couple of things about me. If you haven't figured it out, I am a thinker. I tend to over analyze just about everything. Secondly, I am a bit of a control freak. It is these two things that lead to Nick and I kissing in the office of the church where Nick worked.

Nick and I had been doing things together on my days off for a while. It was nice have someone to do things with who was also gay. We were not "doing" anything, just going to a movie or to the museum. I would drive his direction on my day off, we would have lunch or something and maybe go to a movie. But that was all. I was still feeling bound to the dreaded page thirteen. What this said is that a pastor can be gay, the pastor just can't do anything about it. So although I spent time with Nick, we never did anything physical.

So, I actually kind of planned the whole thing. I had come to trust Nick so I though I could ask him if I could kiss him. I know it sounds kind of calculating, but hey, that's me.

So after the movie, Capote, I think, we went back to the church to get Nick's car. I "had to use the bathroom." So we went into the building. After I went, I came out and told Nick that I had never kissed a man before and could I kiss him? He said yes and so I kissed him.

WOW! It was amazing!

Then I said that I had never touch a man before and could I feel him. But before he could answer, I had my hand on his crotch while I kissed him again. Nick had reached down started to feel me but then he stopped. Later he would tell me that if he didn't stop then, he would have moved things beyond where I was ready to go.

I was a little out of my element but I am thankful Nick didn't push me any father.

The ride home was interesting. I had a hard-on the whole way home. I also was probably a road hazard as my mind was not on my driving.

This is the actual e-mail I sent Nick. (Only the names have been changed.)

Thanks for your kindness in the face of a very selfish request. You have done a great kindness for me! I was kind of worried about making it home as I was a bit distracted! I can still feel your kiss and the way you felt through your pants. I can still feel you touching me. I was hard the whole way home.

You have given me a gift and I appreciate the safe environment in which to experience it. That was a great ending to a nice day.

I guess this was another step in my coming out and my finding Nick.
Posted by BentonQuest at 8:01 PM

what an absolutely wonderful post. You are more special than you will ever know. I love you

that was sweet; and rather stimulating too!

I was touched to read Nick's account of this incident and now yours. There was such an element of romance in it all that it actually left me a bit teary eyed. Perhaps because I relate. I was in my early 40's when I first kissed a man. It was not so sweet as your encounter, but just as impressionable.

Absolutely beautiful. The blogging muse seems to have been spending a lot of time here lately.

Mo and The Purries said...

That was a beautiful post.
I'm so happy that you have found someone so supportive, understanding, and loving.
May you have many such passionate kisses in your life!
love,
Morgen