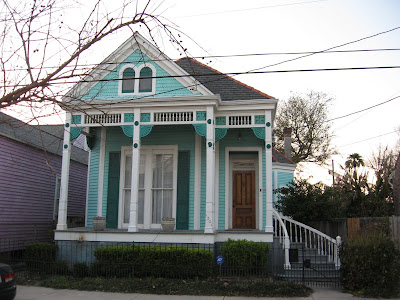 Well, today is our last day in New Orleans.

First, I'd like to clear up a misconception that Ur-Spo voiced in a comment about the picture of Jackson Square. (Spo my friend, I am not trying to pick on you!) One of the misconceptions is that the French Quarter got the attention because of tourist bucks. That does make sense, but the truth of the matter is that the quarter, being the oldest part of the city, was also built on the highest part of the city. So when the flood waters came in, the quarter just got some wet streets. Where other parts got lots of high water (some places do not have a "bathtub ring" because the water went over the top of the houses)the French Quarter was spared. (Makes you wonder about the people who said that the flood was the wrath of God against the city for its decadence and its support of GLBT people!)

But the trip has given me time to think and time to talk. One of the hard things about being a member of the clergy is the, in my opinion, artificiality of position. I guess there is an aspect of this with all jobs, but sometimes it just feels stifling. So much of what makes me "Me" has to be hidden because it does not conform to others expectations of what a "good clergy" should be.

How can I tell others to be true to themselves and be the wondrous creatures God made them to be when I, myself, am not following this advice? Do we need to crash the image of the clergy? Will people be ready for that? Can the church survive without the "Pseudo-god" standing in front of them each Sunday (or whatever day is the worship day)?
Posted by BentonQuest at 7:27 AM

If we can ever get to the point of recognizing that it is not a pseudo-god standing there - (and by "we" I mean both the people and the clergy - not only will the Church survive, it will finally again start to come alive, be faithful to its real mission, and flourish.

Please contact Mimi if you'd like to participate in BlogBlast For Peace again this year. I need a few bloggers to help spread the word on their blogs. Thank you very much!
Peace,
Mimi Lenox

I am glad your trip went well.
Thank you for clarifying the French Quarter matter; sort of makes the argument that Katrina was a punishment fall flat; the sinful quarter was spared and the poor people were hit hardest.