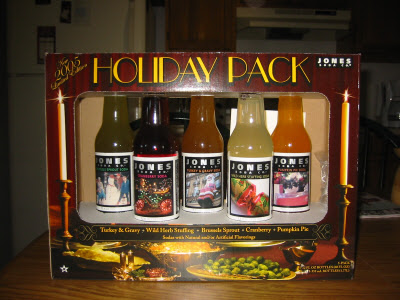 Well, we finally got up the nerver to try a five pack of Jones Holiday Soda. For those of you who are not familiar with it, Jones makes a "Holiday Dinner" in soda form. The 2005 pack I had consisted of these delicacies

We decided to try them in the order of the meal, of course!

Brussel Sprouts was DISGUSTING! One sip was all either of us could stand. Wild Herb Stuffing was a bit better, we managed to get two sips out of that. Turkey and Gravy was back to the one-sip-wonder. It kind of smelled like turkey, but tasted nothing like it. The Cranberry was probably the best of the whole thing. We actually drank all of that. We thought the Pumpkin Pie would be good. Boy, were we wrong! It was not as bad as the Brussel Sprouts, but it was a close call.

All in all, a funny idea, but it is better as an idea and not as an actual experience!
Posted by BentonQuest at 9:18 PM

I'm thinking I'd have to stop after the Cranberry Soda.