I used to hold one of my former congregations out as an example of  unexpected folks being very accepting of Stereotypic Non-Conforming People.  I used to tell how Nic and I have always been accepted into my former congregation by people who were close to 20 years older than me; not the usual group most consider "accepting."  It was always so pleasant going there.  Even if Nic wasn't with me, people would ask how he was doing and send good wishes.  I would even include Nic in my sermons as many clergy will do about their spouses; he is a large part of my life, so, of course, he will show up in the sermons.

But I heard something last weekend that saddened me:  This congregation, who is in need of an on-site clergy, is having difficulty because the clergy in question is gay!  Three people did not want him because he is not heterosexual.  Now this may not sound like a lot, but when you consider that there may be between 7-14 people in the congregation, that is a major portion!  This congregation has been looking for a clergy for three years now and this priest would work there for the amount the congregation had been paying supply clergy.  It sounded like a total "win-win!"  But there are those (who they are, I do not know, nor to I want to know) who do not want this guy because he is gay.

I makes me wonder if these people were just tolerating me.  I am sorry, as it has been said, "we tolerate traffic;" I don't want to be just tolerated.  In the time that I have been there, haven't these people learned anything?

I am stuck in this quandry:  Preaching is a call, we don't do it for the money.  For all the harping I do about it, I still feel like a ship without a rudder.  I am beginning to feel like leading congregations is out of the picture because people cannot get beyond their prejudices.  Even in the face of evidence to the contrary, people will hold so tightly to their failing belief system.

Two congregations that do not want me because I am gay, and one that seemed to be the beacon of hope, still caught in such out-dated frameworks.  It is difficult to not feel frustrated.

The good Dr. Ur-Spo, among others, have told me to just start making glass.  That sounds wonderful short of the fact that the economy is still tanked and I am ok, but I do not consider myself "good."  I still have much to learn before I would feel comfortable making stained glass a profession.

Thus the dilemma I see:  Trying to continue in ministry, knowing that finding a congregation will be neigh on impossible.  Or doing something else, knowing that no matter how hard I try, my heart will not be in it. 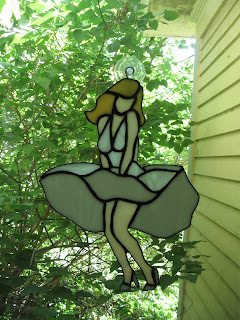 [Pity Party]  I feel at the end of a rope.  I am not good at designing structure for myself, and without a job, I just float.  I see news talking about how people are saying outrageous things, but yet no one seems to be holding the people accountable.  I yelled at a guy yesterday for parking with the end of his car sticking out into traffic (on a curve in the road) and was going to leave it sit there.  "Didn't you notice you are blocking the lane?  Didn't you notice that people can't see you until the turn the corner and are right on top of you?!?" I am going quietly or not so quietly insane.  And who wants a certifiable priest? [/Pity Party]
Posted by BentonQuest at 12:00 PM