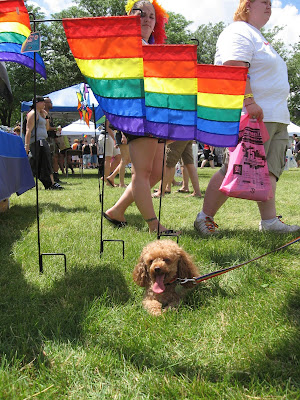 Nick and I went to Michigan Pride today.

It started out cloudy and rainy this morning but by the time of the parade, it was warm and sunny.

It was a lot of fun. We saw a few people we knew and I saw a person whom I work with. I was shocked because he has black hair but as his alter-ego, she has big brown hair! It was fun. We looked at the booths and Amber our dog got a lot of attention. She was resplendent in her new pride collar and leash. In fact, the person who sold it to us at Motor City Pride recognized us and then got to see Amber all gussied up!

I do have to admit that the eye candy was much better at Motor City Pride. No underwear models today. (Bummer.) 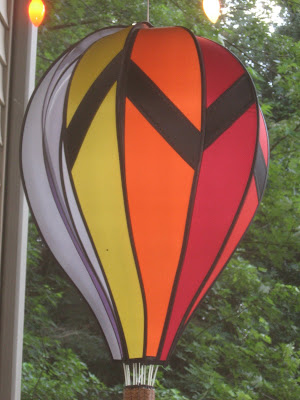 I bought a rainbow hot air balloon spinner at a booth. It was cool because I had received a totally unexpected gift from some people that I had never met before. These guys had read my letter in the newsletter from the church I had just left. They were so moved by my story and the parallels with their own live that they gave me a card and a gift with the stipulation that the gift was to be used for something I wanted. I was not to spend it on bills!

Oh, I also bought some body jewelry, but you ain't gonna get any pictures of that!!

But all in all, it was a good time. I think I got a sun burn, but a fun time was had by all!
Posted by BentonQuest at 5:57 PM