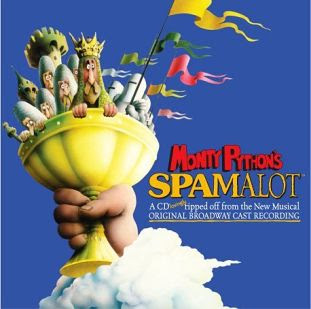 I FINALLY got to see Spamalot! It was great!

I have been a Monty Python fan since I was a kid. I grew up watching Monty Python's Flying Circus on public television when I was a kid. And I guess being exposed to so much absurdity at such a young age has an effect on one's outlook on life. I sometimes find myself chuckling at the most inopportune times because I will think of something "Pythonesque."

The show was wonderful! I am sure I was not the only person in the audience having difficulty not making the whole thing "audience participation." Everyone's favorite lines from the movie were there, ("Your mother was a hamster and your father smelled of elderberries")plus some new ones. A wonderful addition was the "diva" Lady of the Lake and her complaint of not getting enough stagetime.

The only unfortunate part of the evening is that Nick was not able to go with me. I was able to get one ticket at over half off because someone in the congregation had misplanned. We could not have afforded two tickets at the $68 price. As is, we really couldn't afford one at $30 dollars. But, as Nick put it, "Ben, you have been talking about this show for over two years," so casting financial caution to the wind, I bought the ticket and went. And as I said, I loved it!

I just hope to have an opportunity to go again, this time with Nick next to me!

Posted by BentonQuest at 8:41 AM

I know it is from another movie, but recently at work we had a humorous go 'round based on the "reading from the Book of Armaments".

MPHC will linger forever
one just has to say a line from it in public and someone will respond with the appropriate response.
i do hope they kept the knights who say nee!?