The Moving Of The Holy Spirit 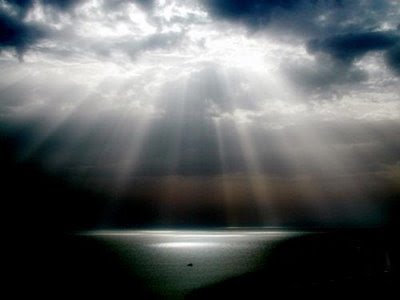 A while ago, Dr. Ur-Spo asked me to write something about the Holy Spirit.  I guess the spirit finally moved me to do so!

When I think of the Holy Spirit, I guess there are a couple of things that need to be made clear.  The first is that this is NOT a personal phenomenon, it is the phenomenon of a group.  I guess it may be likened to the Collective Consciousness of Jungian Theory.

Now, having said that it is not a personal phenomenon, it is a phenomenon that happens to people.  The Holy Spirit works with individuals.  I guess the best analogy I can think of is people moving in a crowd or fish in a school, each one acts individually, but together, they create an epiphenomenon.

This is an important point to make.  If the person just functions in a vacuum, that person may be claiming just about anything as "Spirit Inspired."  I had a parishioner who would call at all kinds of weird hours claiming the "Holy Spirit told me to call."  When I finally confronted him by asking why the Holy Spirit would tell him to call when I was out running, or why the Holy Spirit would care how many seats are in an auditorium, he finally stopped.

Now, that doesn't mean that the Holy Spirit couldn't be working through the parishioner, but that is where the whole group phenomenon comes into play.  I believe that if something is of the Spirit, it is reinforced by the community.  This doesn't mean that some truly miraculous things can't happen.  I am reminded of the scene in "Field of Dreams" where Ray tells his wife that he thinks he should build a baseball field.  His wife's response is that it is totally nuts, but she agrees.

In the ELCA Lutheran Church, becoming a pastor is a discernment process.  When a person says they feel called to the clergy, it goes through a process of meeting with various groups to see if this is just an ego trip for the candidate or if this is really of the Spirit.  This process continues all through seminary with continued meetings for discernment.  Finally, the person is not ordained until a church actually calls the person.  I have known people who have gone through seminary only to not find a call to a church and not receive ordination.  These people were not bad people, it just appears that the Spirit was moving in a different direction.

This is NOT an exact science.  Just s each fish in a school of fish may not know why it is doing what it is doing, the group effect is quite impressive.  We may not be privy to the whole plan but we need to be willing to do what we can and be in contact with the community. The community affects our behavior and we affect the behavior of the community.
Posted by BentonQuest at 8:19 AM

Thank you for this.
Sometimes I have a prayer 'Come Holy Spirit' when I start a task, a job, a day etc. If I am doing this on my own, does this mean I should be consulting another member of the Trinity, leaving HS for a group setting?