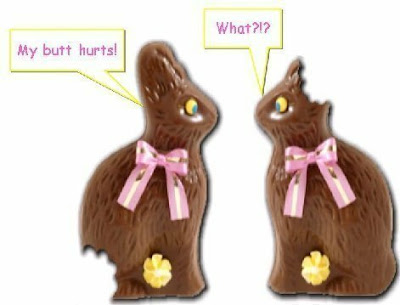 This Easter was different than ones of the past. In many ways, it had a whole lot more meaning. I think this was because I really identified with the stories and with the whole season.

The Holy Week is all about the tension of the worldly and the divine. The disciples are forced to view the trials of life and to deal with these trials without the support systems they thought would be there. There are troubles and trials of life and but also there are the promises that are made in the death and resurrection of Christ.

So, I guess that going through the trials of life that seem to be quite abundant right now, Holy Week seemed to be especially meaningful.

You might say that this is just another example of an "opiate of the people" and you may be right, but in many ways, our views of life are just exactly that, our VIEWS. Life may truly be going down the tubes, but if we have a positive attitude, we can usually make it through.

If you are interested, here is the sermon I preached on Easter morning. The service was an Easter Vigil which involves moving from darkness into light.

It is often said that the preacher preaches to himself. I think your proclamation spoke to many people, near and far, even those in PA. Thank you.

you say.
It is irony that Christ would not search out the great and powerful but look to the average person to spread his message.
i say.
The great and the powerful might not be such a bad idea in this day and age, consdering the " avereage" man of today is marred in his own fear and self loathing from a spiritual standpoint that was brainwashed into him by previous generations of the " avereage" pastor, who suffered from his own inadaquite self image, thusly producing generations of spiritual cretins

that was touching and thoughtful; thank you for posting it.