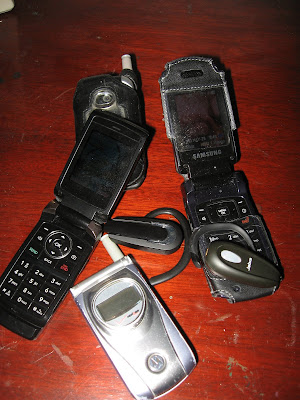 Ur-Spo today mentioned how people will pull a cell phone out in the middle of an appointment and begin talking. I love his response to these people.

I definately have a love/hate relationship with cell phones. I think they are great, but they seem to be a reason for people to become even ruder than normal.

My first run-in with rude cell phone people was over 10 years ago. I was in a restaurant and bar in Galena ,IL and was having lunch with a friend. Three people were sitting at the bar having lunch also. Two of the people were chatting while the third person in the group was talking on the phone. The conversation when on for over 20 minutes. How rude to ignore the others in your party.

Of course, we have the folks talking and driving. You can tell who they are because they are in the left lane driving slower than everyone else. They are the ones doing what I love to call the "cell phone lean." This is where the person appears to be sitting in the middle of the car because they need to prop their head up on their phone. And just when anyone does anything stupid on the road, it seems like they are on the phone.

Then we have the people who cannot get off the phone to order. Just tell the person you are talking to to hold on a moment and then you can finish your conversation. It seems that having a cell phone gives you permission to be rude. And if the person has a bluetooth, then rudeness takes on a whole new level!

I know if I responded to the people on the phone as if they were talking to me, they would think I was the one being rude. But what they are telling me is that I am not worth there time to pay attention to. Arrrrggg.......

I heard a thing on NPR which stated that rudeness is the new chivalry. People didn't even know the meaning of the word "chivalry." It shows.

Maybe we will grow up someday
Posted by BentonQuest at 9:17 AM

There's a Subway in Pittsford, NY that has a sign up announcing that they will not take an order from someone while they're talking on their cell phone. I understand that other businesses have implemented similar policies.

As someone who has had to wait behind a person on their cell phone, I say "thank you" to those businesses.