I am in the process of making a new clock for in the kitchen. The clock we had previously fell off the wall when the neighbor was moving and broke. So I decided to make the clock seen here. 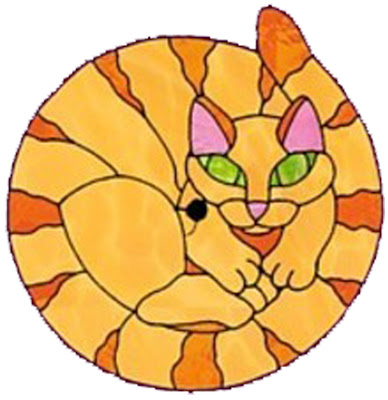 What I like about the clock is that the numbers are not obvious. Actually, there are no numbers, the cat's stripes mark the time.

I have shown many of my finished products and I thought people might be interested in the creation process. So I will do a couple of posts showing the steps from pattern to finished product.

The first thing I did was to make two copies of the above pattern and number all of the parts. 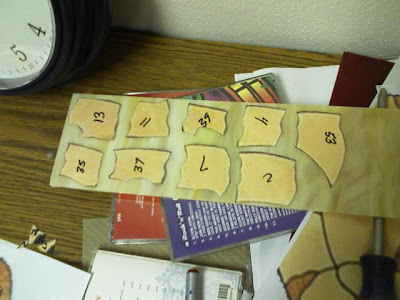 Then I cut one of the patterns apart and placed the pieces on a piece of glass. The glass I am using has "grain" just like material. As such, I have to make sure that the pieces are all arranged in the appropriate manner. If the pieces are not properly aligned, the effect is amaturish. 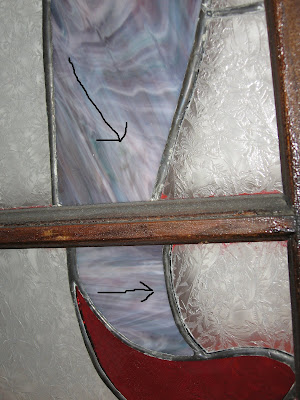 This piece shows an early piece of mine. In this, I didn't take the grain of the glass into consideration. You can see by the arrows that one grain is at a diagonal and one is horizontal. Some have told me that it is not noticable, but I just don't like the way it looks. 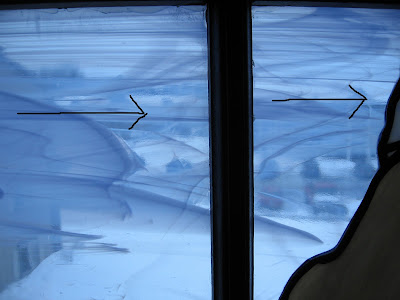 Here is a piece where I compensated for the grain. These are two different pieces of glass seperated by a piece of wood. But I wanted it to look like clouds in the sky, so by being sure the grain was horizontal, the sky looks like clouds.

With the clock, I had to consider how the fur of the cat would look as the cat was lying. I figured he grain would go down the body of the cat and so the grain should move toward the center of the clock. The stripes also have grain to them too. 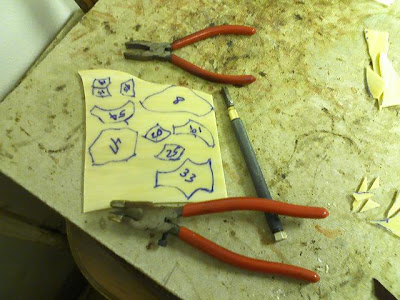 Here is a piece of glass with some pattern pieces drawn on it. I use a permanent marker, which thankfully, is not permanent on glass. The top red handled pliers is called a "breaker/grozer pliers". The bottom pliers is called a "running pliers". The third tool there is a scorer. The scorer is used to make a scratch in the glass and then the glass is broke with the pliers. The grozer is used to wear away at a piece of glass to shape it. 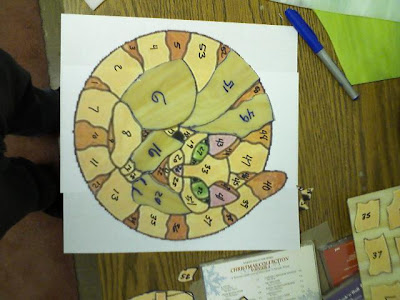 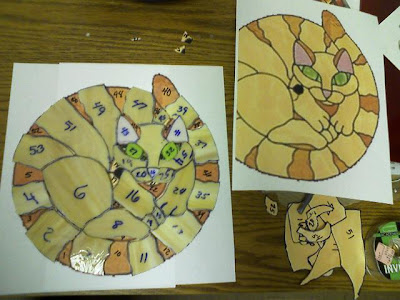 At this point, the lighter colors of glass are cut and placed. They have not been ground yet. Grinding is the process where the pieces are shaped so as to fit together snugly. A power tool specifically designed for grinding glass is used for this process. 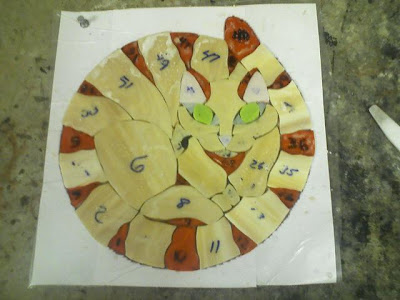 At this point, all the pieces are cut and ground. They fit snugly together but they are not tight. Next the pieces will be taped and soldered. But that is for Part 2! 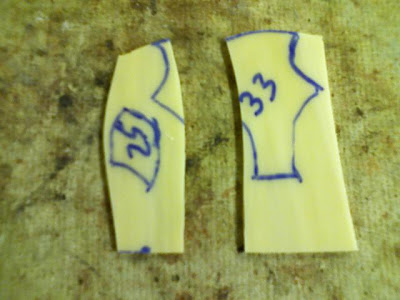 This photo shows one of the heartbreaks of stained glass. When dealing with glass with grain, you have to be especially careful. The glass "likes" to break with the grain. So when you have a curve, care must be taken so the glass breaks along the curve and not follow the grain.


The project continues here.
Posted by BentonQuest at 11:08 AM

thanks for sharing not only your creation but the creative process! Very interesting. I'd be afraid that I would always be cutting my fingers on the glass.

Benton it was Nick!