Nick didn't have to work yesterday so he was wonderful and suggested we get away for mini-vacation. So we decided to go to Saugatuck for a couple of days. We have both been under a fair amount of stress lately and he thought it would be good to get away.

So we packed up and got someone to let the dog out. Then we headed on our way. Now last weekend was beautiful. Even Monday was great. But this weekend... Well, we left with snow flurries in the air and a fairly stiff breeze. I did manage to get gas at $2.54 a gallon, just before it went up to $2.86/gallon.

We went first to South Haven and did some shopping. One to the thing we saw in a store was just hilarious was a knife holder called "The Ex." 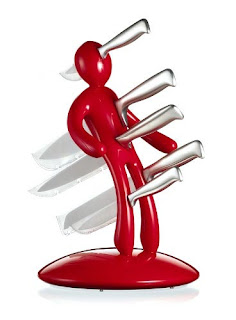 We had wished we knew someone who had gotten a divorce just so we could give it to them.

We then went and checked into our hotel and went shopping. It was nice to be in a place where there are more "'mos" per square mile than a Three Stooges convention. Many of the shops were owned by "family members."

We had a late lunch and the place had cream of crab soup. They only make it on the first Friday each month and we were lucky enough to be there on the right day! It was great stuff. We sat and ate and watched it snow.

Later we braved near blizzard conditions to go out to one of the local gay resorts. The place is called The Dunes. We thought the bar at "The Midwest's Largest Gay Resort" should have been a pretty happening time. Well... It was snowing and the Friday before Easter. But there was an underwear and speedo show on the big screen televisions. And besides, I was with Nick. (Sorry for the mushy part.)

I could barely see the road on the way home and it was not from the the beers. The snow was falling and blowing. Now remember, this was SUPPOSED to be a spring get-away.

When we awoke we were greeted with this: 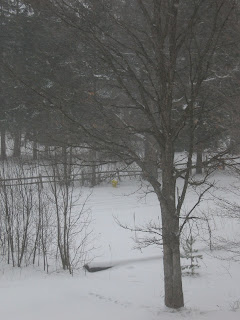 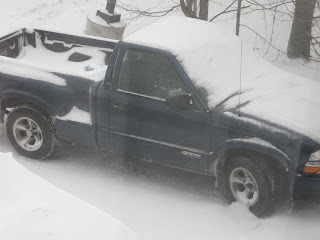 It snowed all night.

Nick was feeling bad because he wanted it to be wonderful. But it was wonderful. It was fun in the fact that it was nothing we would have predicted. And besides, I got to spend some time with Nick which I haven't been able to over the past week.
Posted by BentonQuest at 6:52 PM

dear me
snow!
nasty midwest trick to dump snow so late into April.

I love Saugatuck! We go there a few times each summer! Stay at Campit, a gay campground. It is way to cold right now.
We will be there this summer in July and again in August. If you are going back again, let us know. We can do lunch!

Glad you two got a chance to get away and regroup.

We had snow at my in-laws all weekend but not quite as much as you.

Hmmm...given the chance between snowy, cold Toledo alone, and snowy, cold Saugatuck with a person I cared deeply with, hmmm...no, I don't even have to think about it a second.