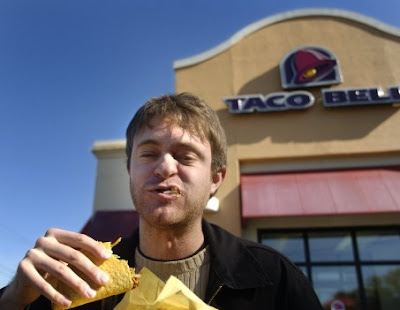 I was coming home from work and decided, against my pledge to never go to Taco Bell again (a long story) to go to Taco Bell. I didn't order my favorite because you can no longer get it as "meal deal" (part of the long story) but I did get the chilupas with a soft shell taco.

When I got to the window, they handed me the bag and I was on my way.

I pulled out the taco and found that it was a hard shell. No bother, this has happened before. It was also a taco supreme. Again no problem, I just took off the tomatoes. Then I went to reach for a chilupa and all I found in the bag was more tacos supreme.

I quickly turned around to return the tacos.

I was a little miffed at having to go into the store, I just wanted to get home, but I also didn't want a bunch of tacos. So I walked in and said that I went through the drive thru and all I got was a bunch of tacos. The girl at the window said, "Oh! Good!" and took the bag from me.

Before I even had a chance to tell the girl that I had eaten one of the tacos, she had handed it out the window and the woman in the drive thru was on her way. Then the girl at the window started to yell at another person in the kitchen that I could not see. I felt like I was at a dinner party and the hosts get into a squabble.

The manager sent the window girl on a break and the girl sat down and immediately strarted to text someone. And I waited to see if I was going to get my chilupas. (I had a similar thing happen at McDonalds and I never got my food until I finally complained. Then they made my sandwich correctly. (But that is another long story!)) I finally got my food and walked out the door. At this point, I was going to claim whatever they gave me.

The questions I have:

Posted by BentonQuest at 8:48 AM

If only you could learn to be lower maintenance and just accept the food you are given...

Taco Bell seems to be one of the worst for bad service and bad food; yucko. :-$

1) I think they worked in coal mines or something like that.
2) I thought re-serving food was illegal for that reason.
3) Nah, you always end up with an extra taco that you try to give away and then force yourself to eat a few bites of so you feel like you're not wasting food.
4) Because of the chalupas?

Every Saturday (or almost) Steve and I stop at Taco Bell for lunch - we've gotten to hate the place, but the food isn't bad for the price. :)