Well, the big concert was last night. I was really pretty good, if I do say so. We really peaked at the right time and the doubts some had about whether we were going to pull it off were unrealized.

A new one for those of you who sing in choirs, yes, they tell you to not wear cologne or perfume, but they should also tell you not to eat anything with garlic. The guy who was standing next to me had garlic wafting off of him all night. It didn't make the singing hard, per se, but I had this strange craving for fettuccine by the end of the concert.

I was sad that Nick was not able to make it to the concert, but I didn't want him in a ditch somewhere.

I got to see a few folks from my previous congregation and that was very nice. I also got treated to a late dinner by some people from my former congregation.

All in all, it was a nice night.

And now, for Nick, here is the picture: 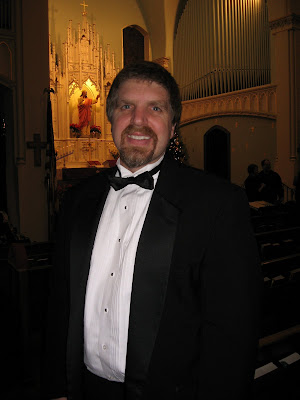 Posted by BentonQuest at 8:02 AM

What a stud! Ain't I the lucky one?

To Nick: you betcha!

To Ben: Nice pic. I'll bet a copy ends up being frames on someone's mantel. ;) Glad the concert went well, and I understand the prohibition about garlic. Euuwww. Yuk. But I must ask: did you have Italian at the dinner after?

Wow. You clean up real good.